Out of the Interior: Survival of the Small-town Cinema in British Columbia is a full-length exploration of classic movie theatres in BC’s southern interior, from Vernon’s Towne Cinema to Creston's Tivioli; from Grand Forks’ GEM to Revelstoke's Roxy – and every stop along the way.
The filmmakers delve into the history of public film exhibition in our province, celebrate the communal moviegoing experience in the present – and offer a glimpse of the movie house’s future in the digital age.
The documentary is also a tribute to the hard-working men and women of the region who keep the popcorn hot and the movies flickering on our screens.
"A heart-warming film that focuses on the people, the real characters,
who are keeping these theatres going."
- Tom Wayman, author of The Shadows We Mistake for Love and Helpless Angels
"...the visuals, music and interviews shed so much light on the history,
and the cultural and social necessity, of these small-town cinemas."
- Jude Clarke, artist
"Gorgeous visuals...the tone is spot on."
- Hannah Calder, author of More House and Piranesi's Figures
"Out of the Interior makes me want to take a road trip to southern BC.
It also makes me want to see a movie in each of the region's theatres!"
- Dave Riopel, dolly and crane operator, movie lover
Co-director Curtis Emde was born in the Kootenays and grew up in the North Okanagan. Vernon's Towne Theatre was his childhood movie house (he would later, unsuccessfully, apply for a job there!). Like many of his generation, he took regular moviegoing at independent single-screen cinemas for granted, even in the face of TV and VHS. The Towne closed in the late 80s and then again in the late 90s, but it seemed to still be there, and he gave little thought to what it takes to keep an independent single-screen theatre's lights on.
Years later, Emde and his Brazilian-born wife Silmara were living in Vancouver when they noticed, starting around 2010, than many of the city's vintage cinemas started closing for good. The Ridge in Kitsilano, the Hollywood on West Broadway, the West End's Denman Theatre – it was movie theatre attrition.
Curtis and Silmara started documenting this transitional period through a series of articles, photography exhibits and short-form videos. This work became the basis of their multi-media Projection Project. They discovered that the switch from traditional 35mm film to digital projection was a major factor in many of the recent closings. The usual suspects were also frequently cited as reasons: the variety offered by enormous Cineplex and Landmark multiplexes and online movie streaming.
However, Vernon's Towne had not only managed the expensive digital conversion, but was holding its own against a Galaxy 7 multiplex just up the street. And it wasn't alone: a winter road trip through the region, from the North Okanagan to Cranbrook, on to Nelson and through Grand Forks and back up to Vernon – ostensibly a vacation – revealed that nearly every main street in every small town en route had its own movie theatre. These weren't former cinemas now gutted and functioning as Bingo halls or turned into churches, these were contemporary businesses showing the latest Hollywood movies. From the Golden Cinema at the foothills of the Rockies to the Gem Theatre in Boundary Country – each discovery raised the Emdes' curiosity: it seems that something beyond the switch to digital projection was keeping these cinemas of the southern interior going. But what, exactly?
To find out, they returned to the region six months later, for the first of several trips they'd take through the Kootenay, Okanagan, Boundary, Columbia Valley and Shuswap regions to make a documentary that would seek to answer some key questions: what makes cinemas in smaller communities succeed? And how fragile is this success, given that several of these theatres of the interior are currently for sale?
There's nothing like being able to visit one's hometown and still be able to buy a ticket and see a movie at the theatre one went to as a child. The experience is rich in nostalgia, but the theatres aren't museums: they're modern places of employment. And the stories of those employed there, as told to Curtis and Silmara in lobbies, concession areas, auditoriums and projection booths throughout the southern interior, are personal and unvarnished; often celebratory, frequently funny, sometimes sad – but are always real, and always rooted in the community. 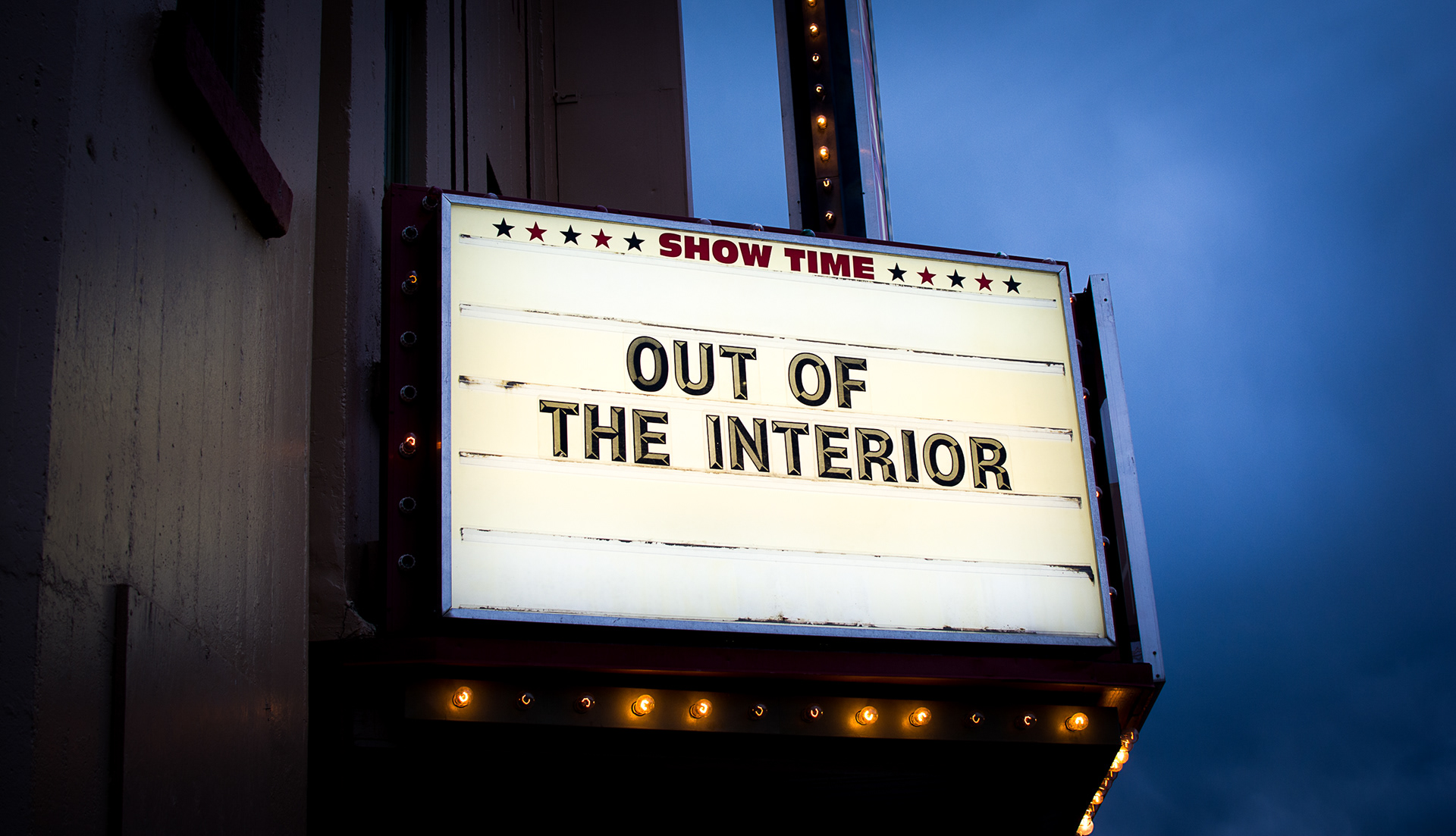 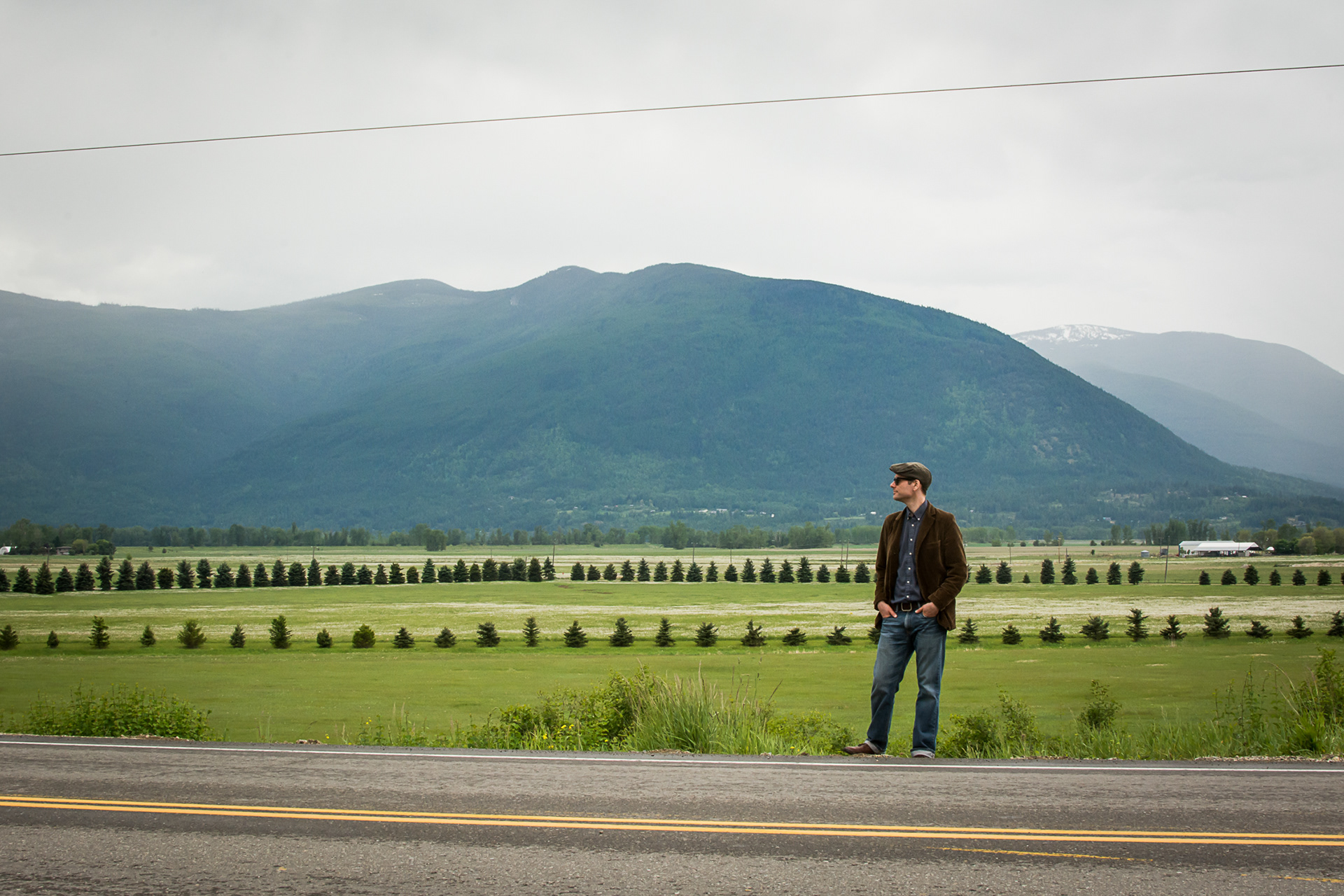 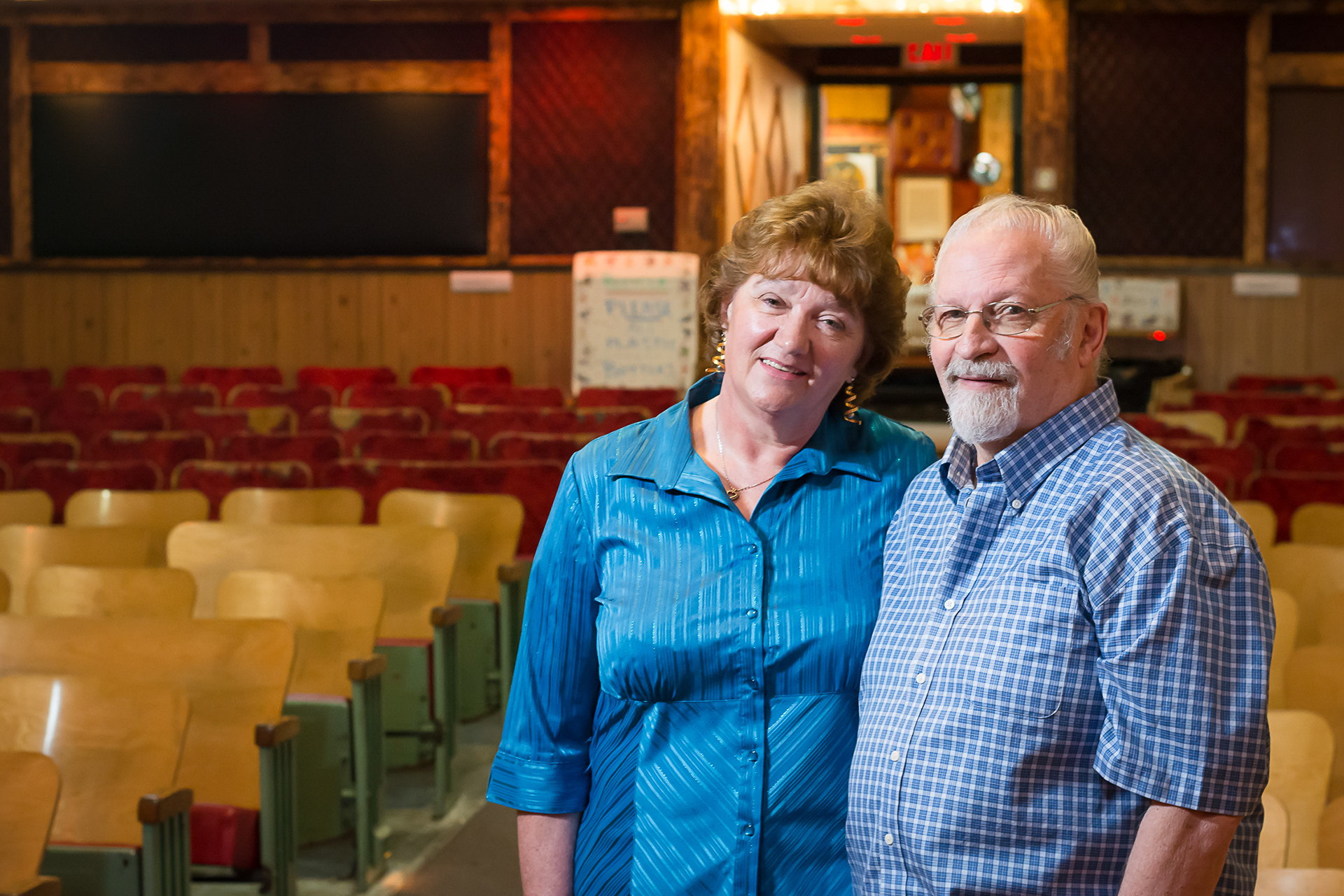 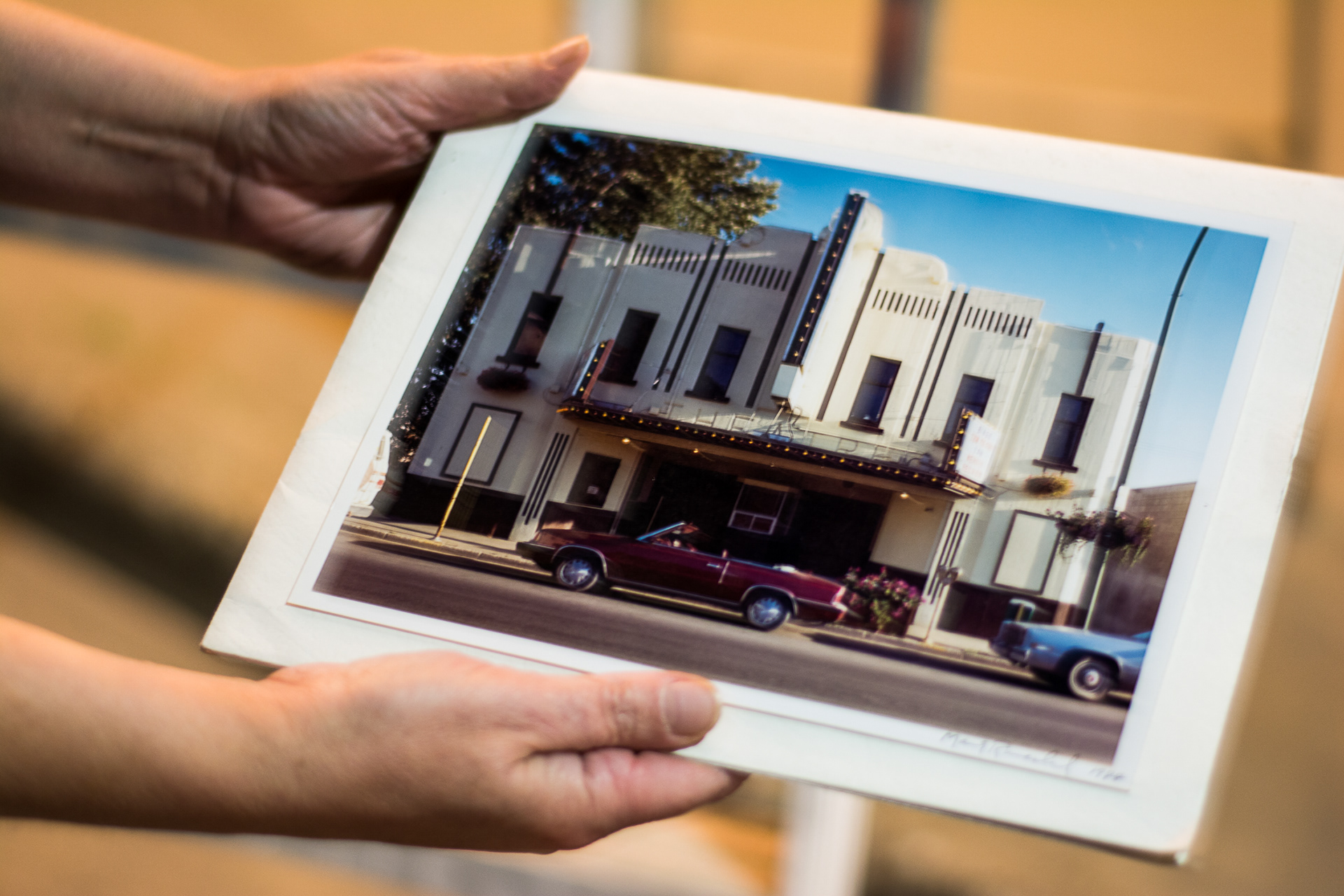 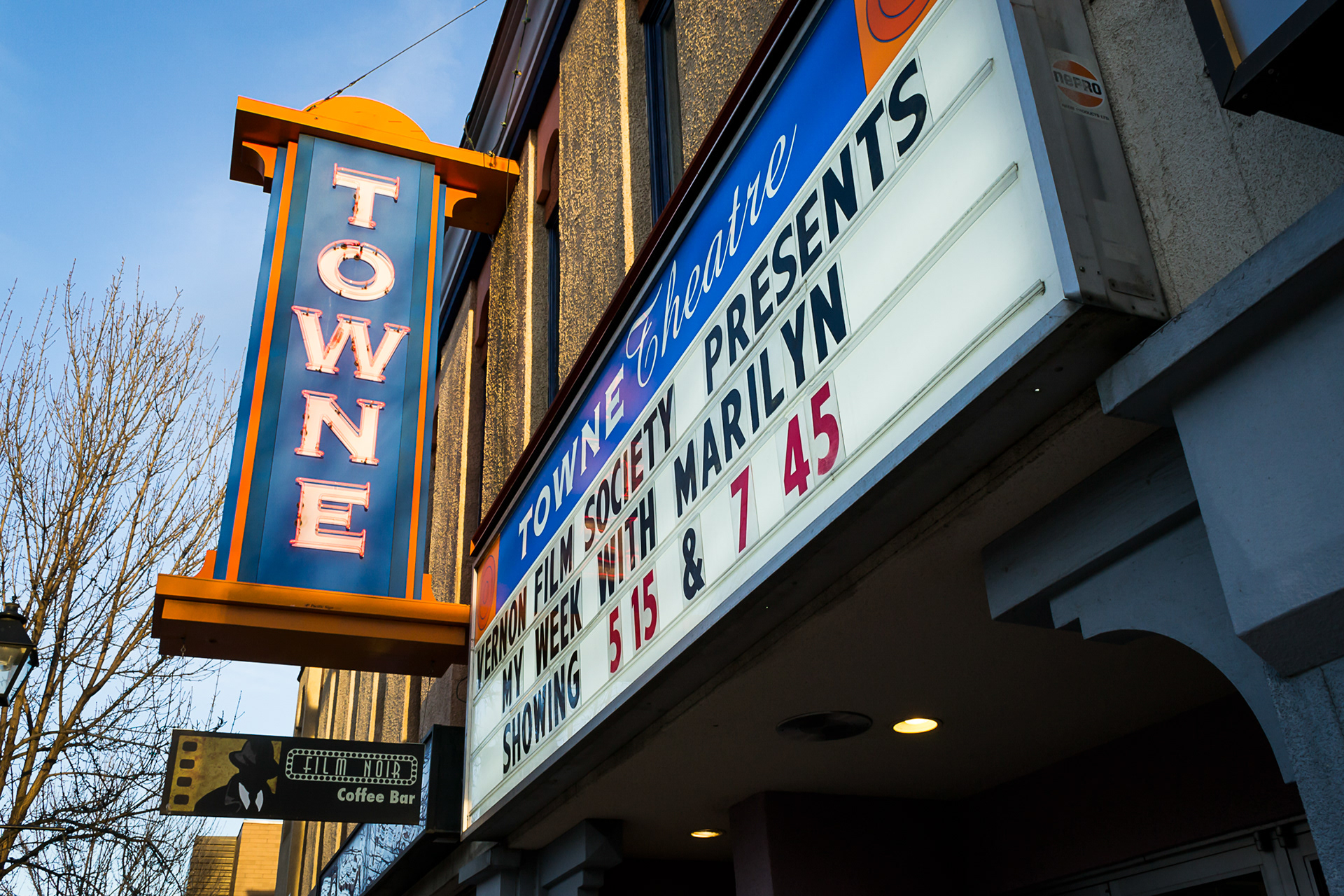 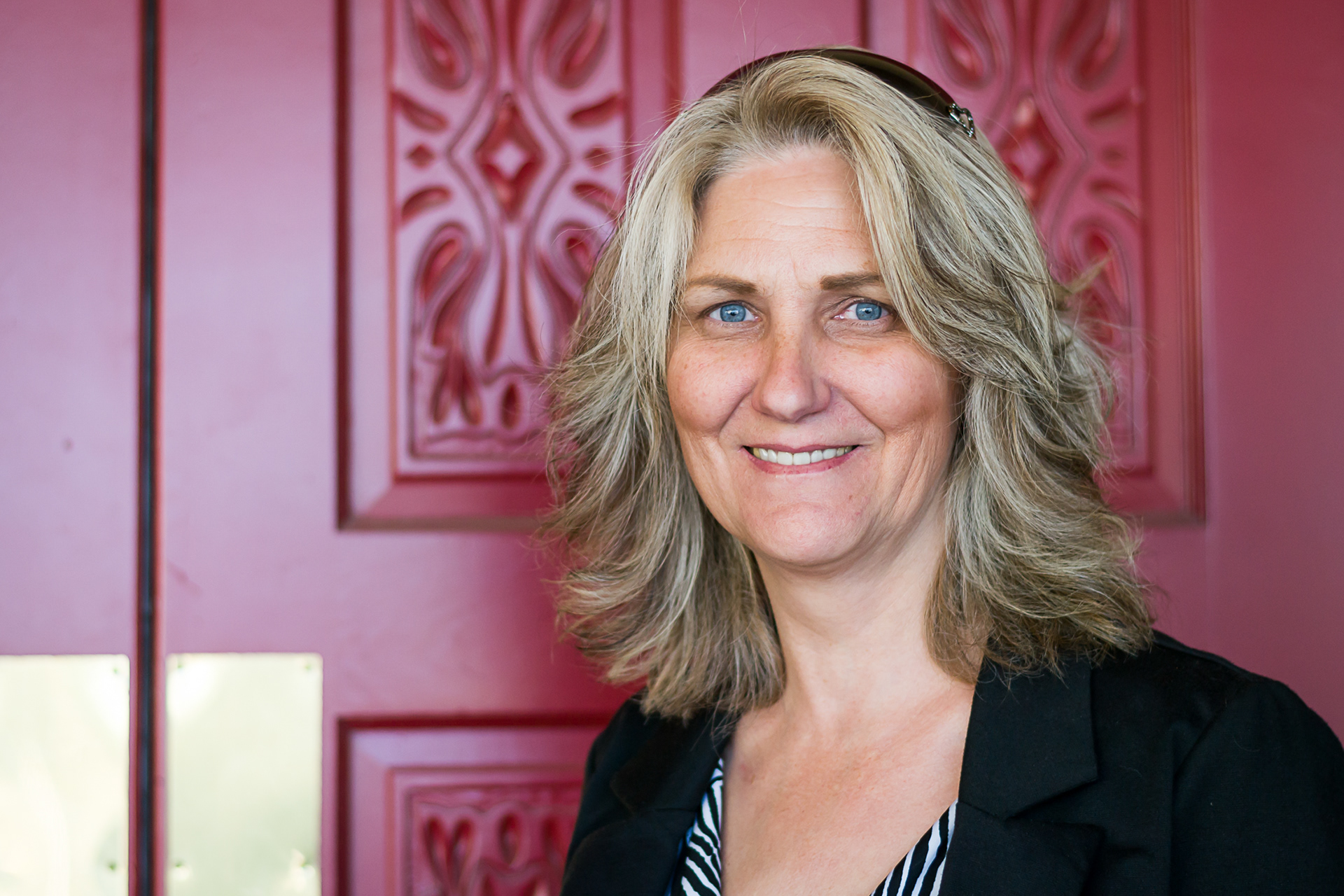 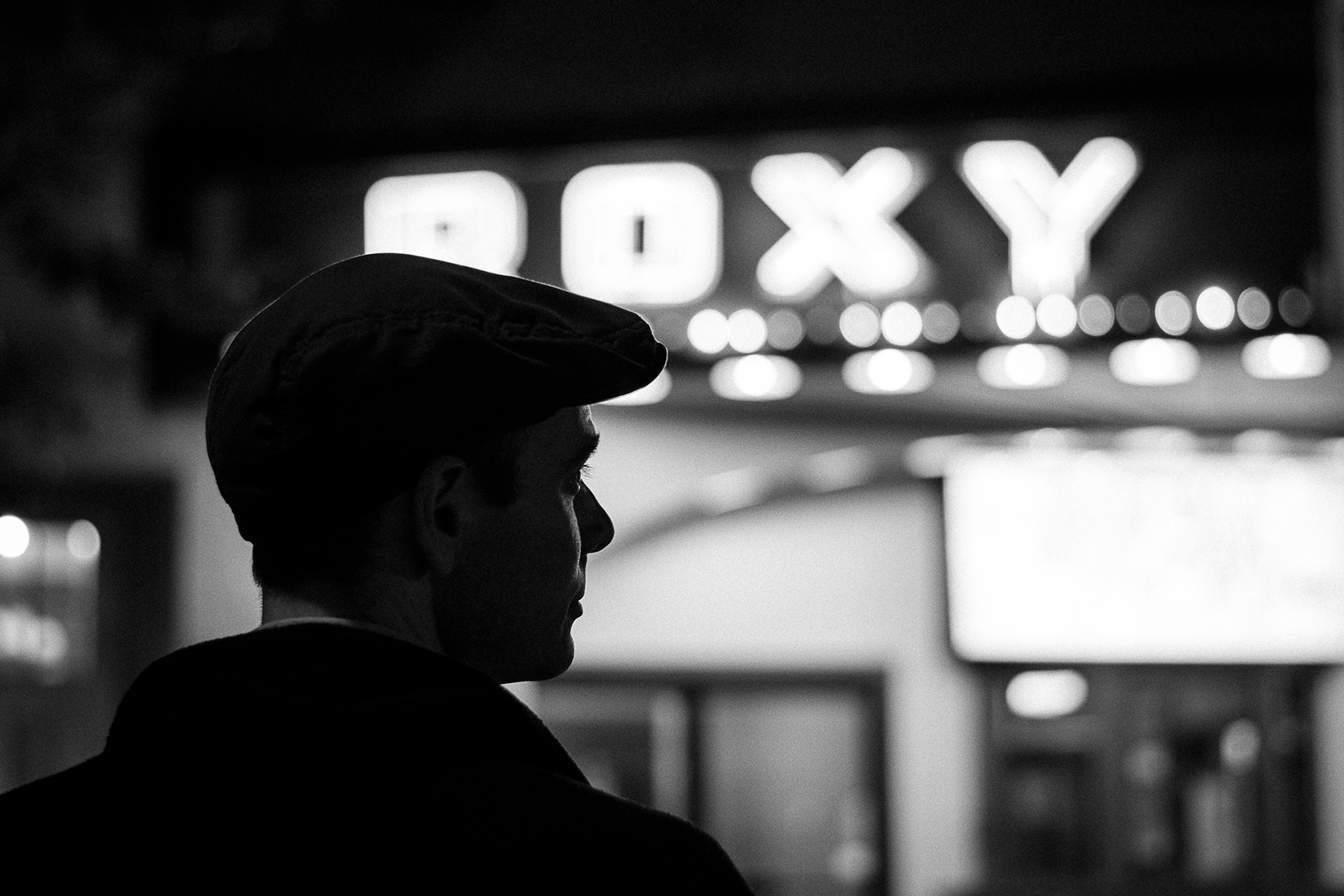 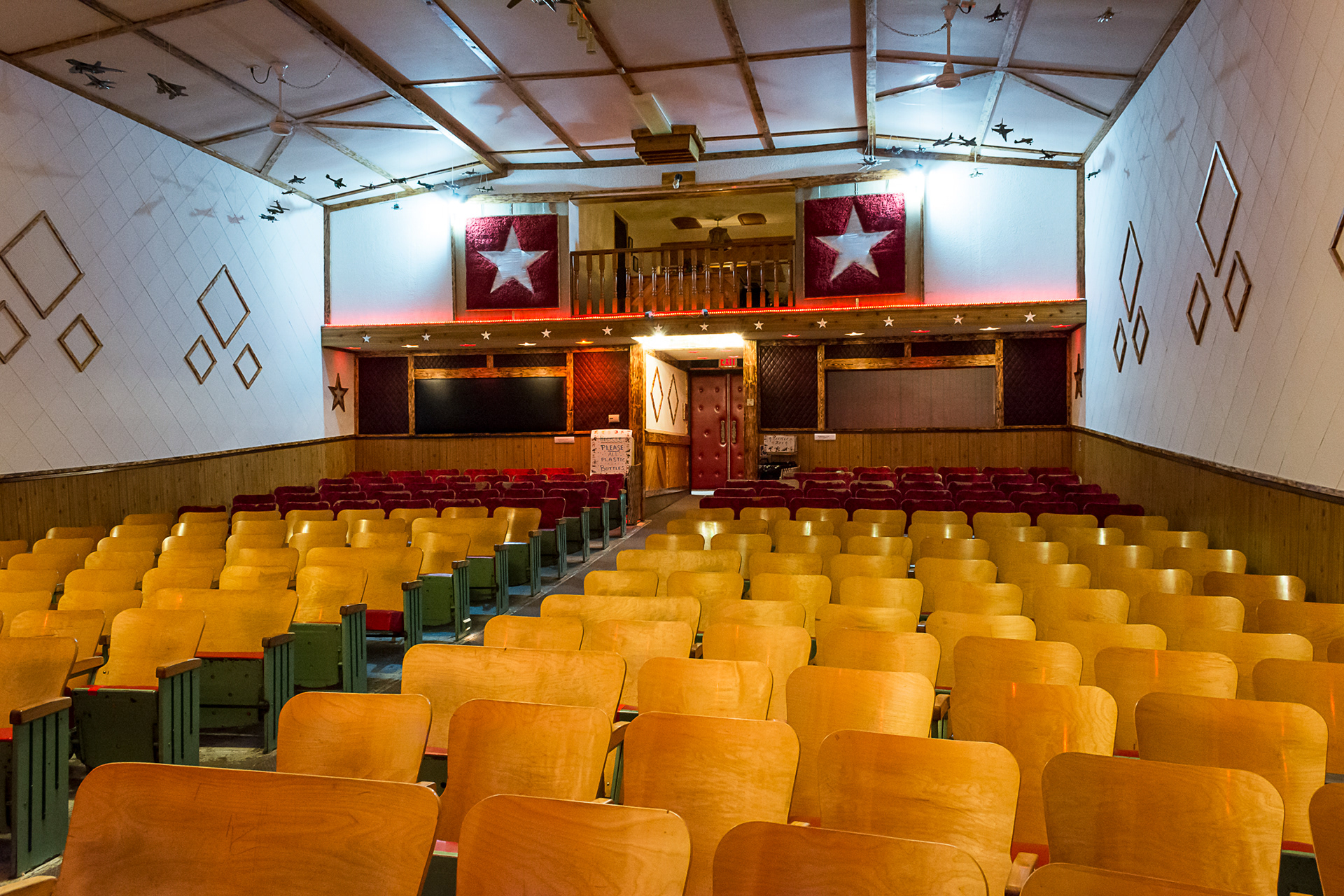 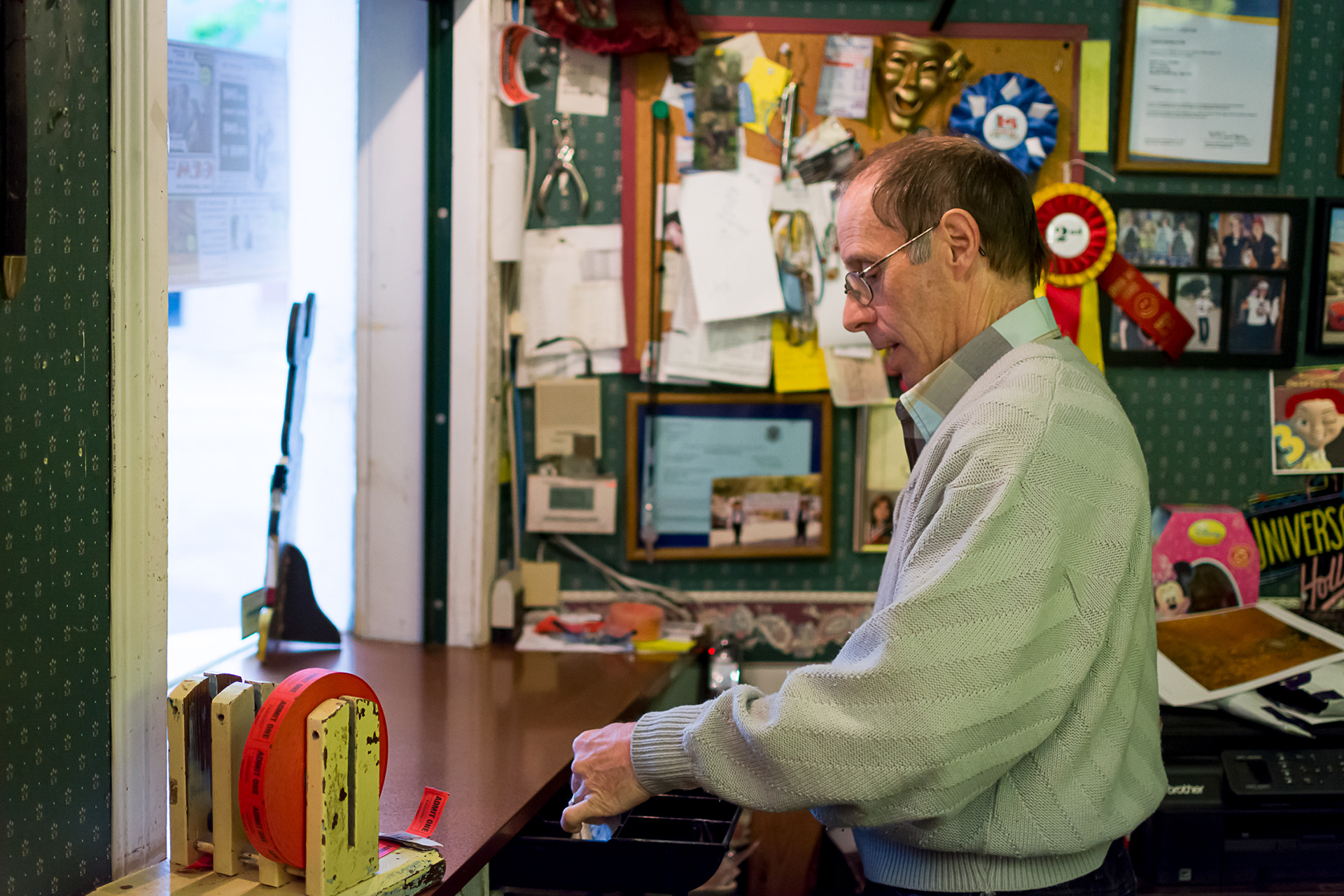 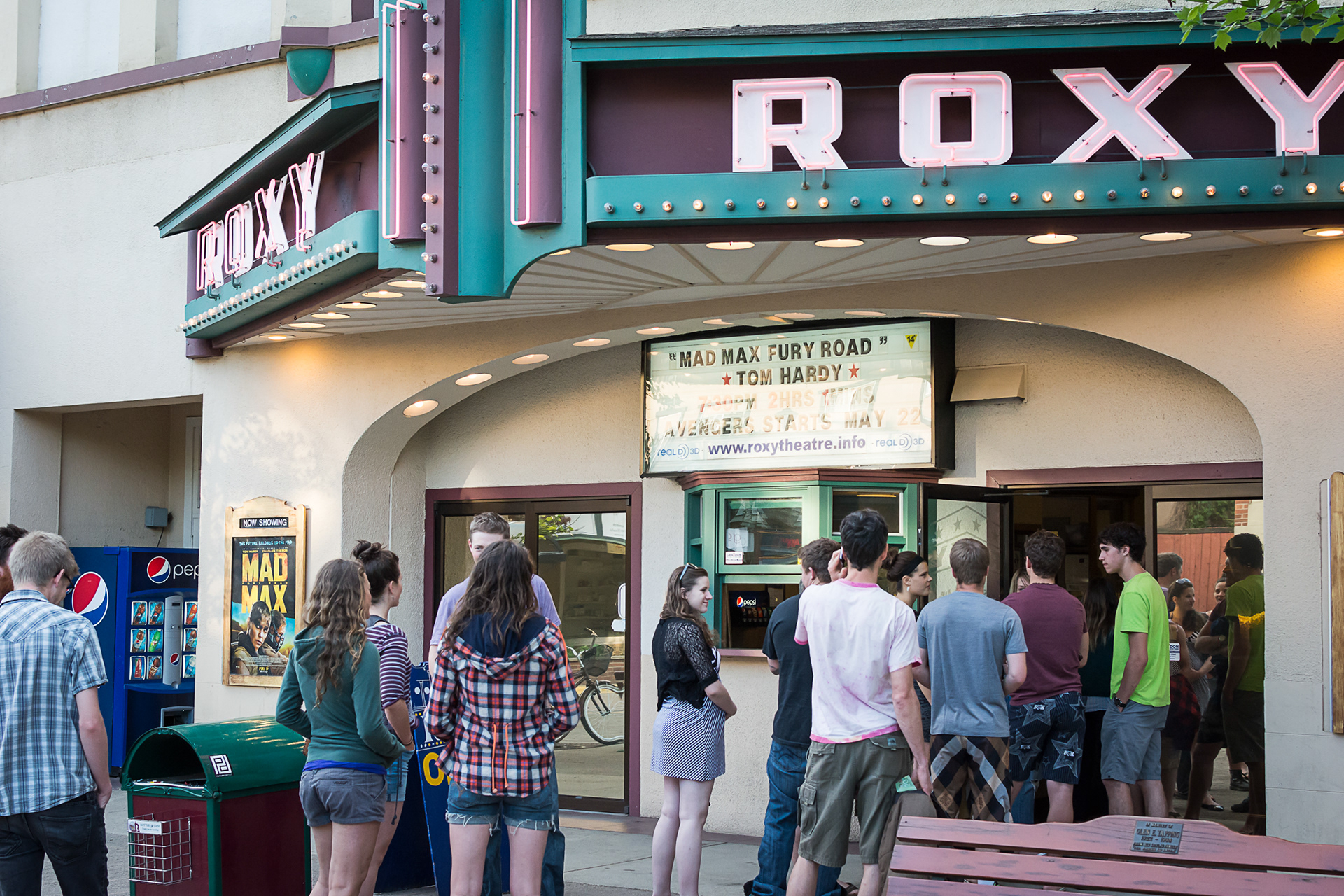 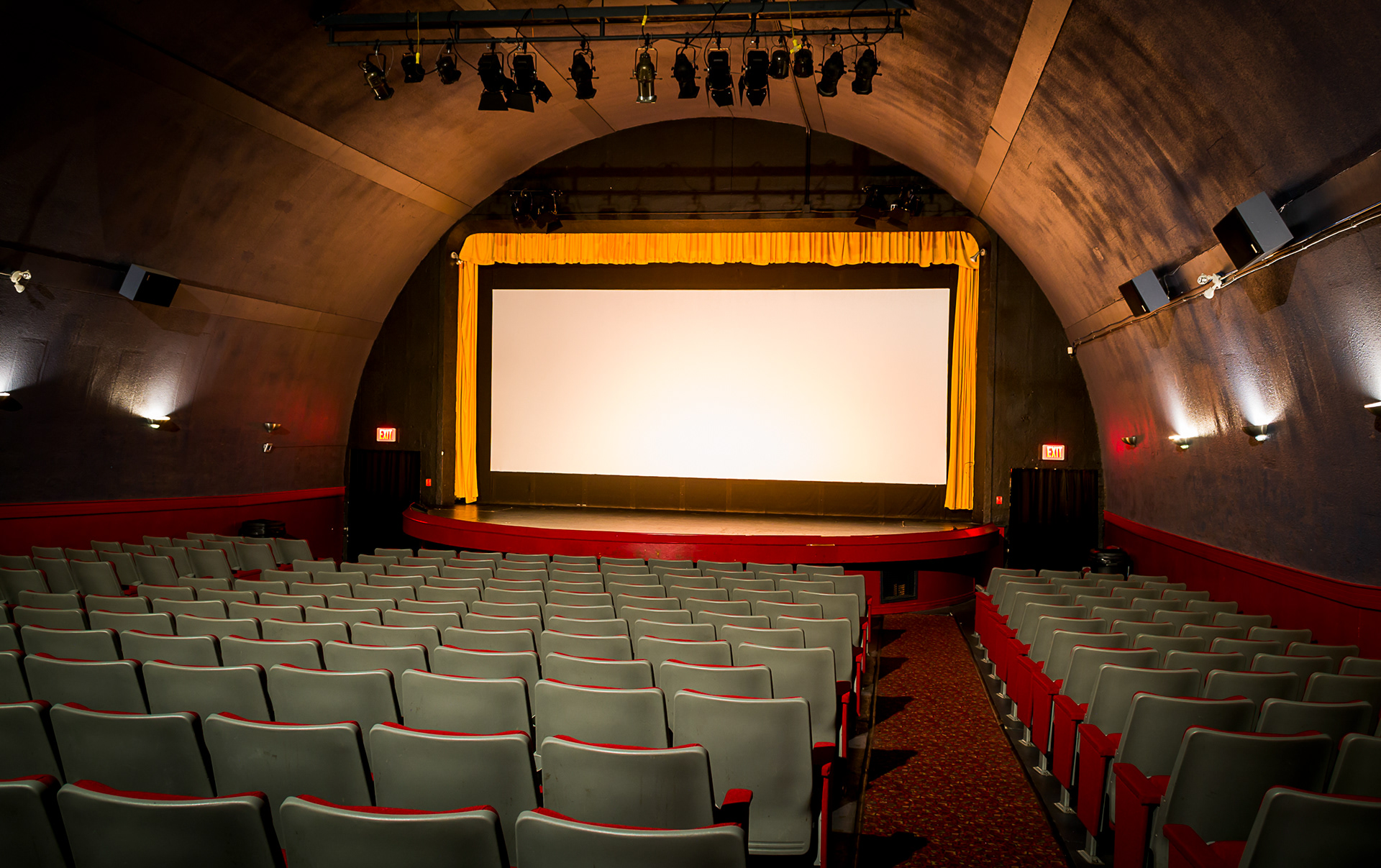 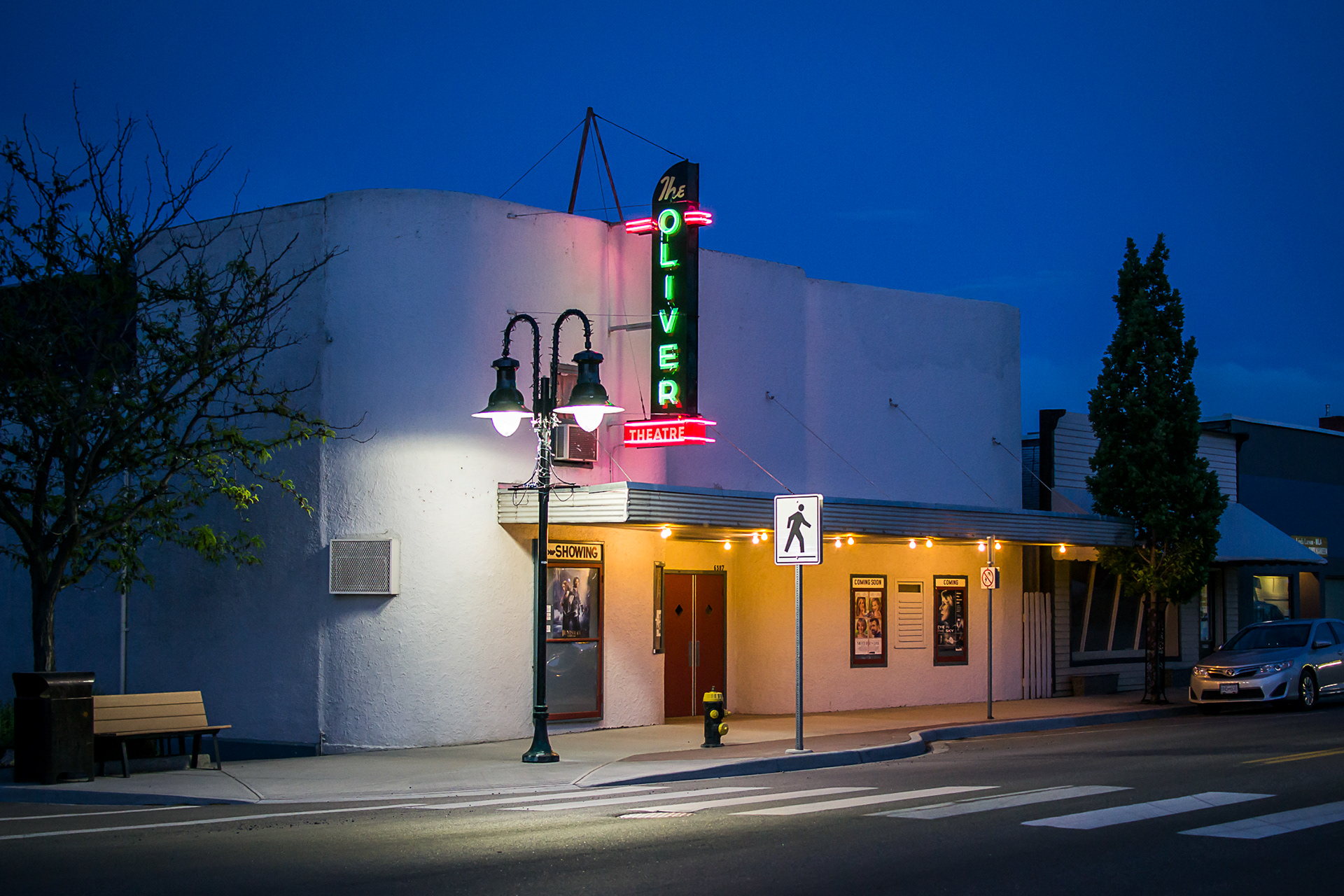 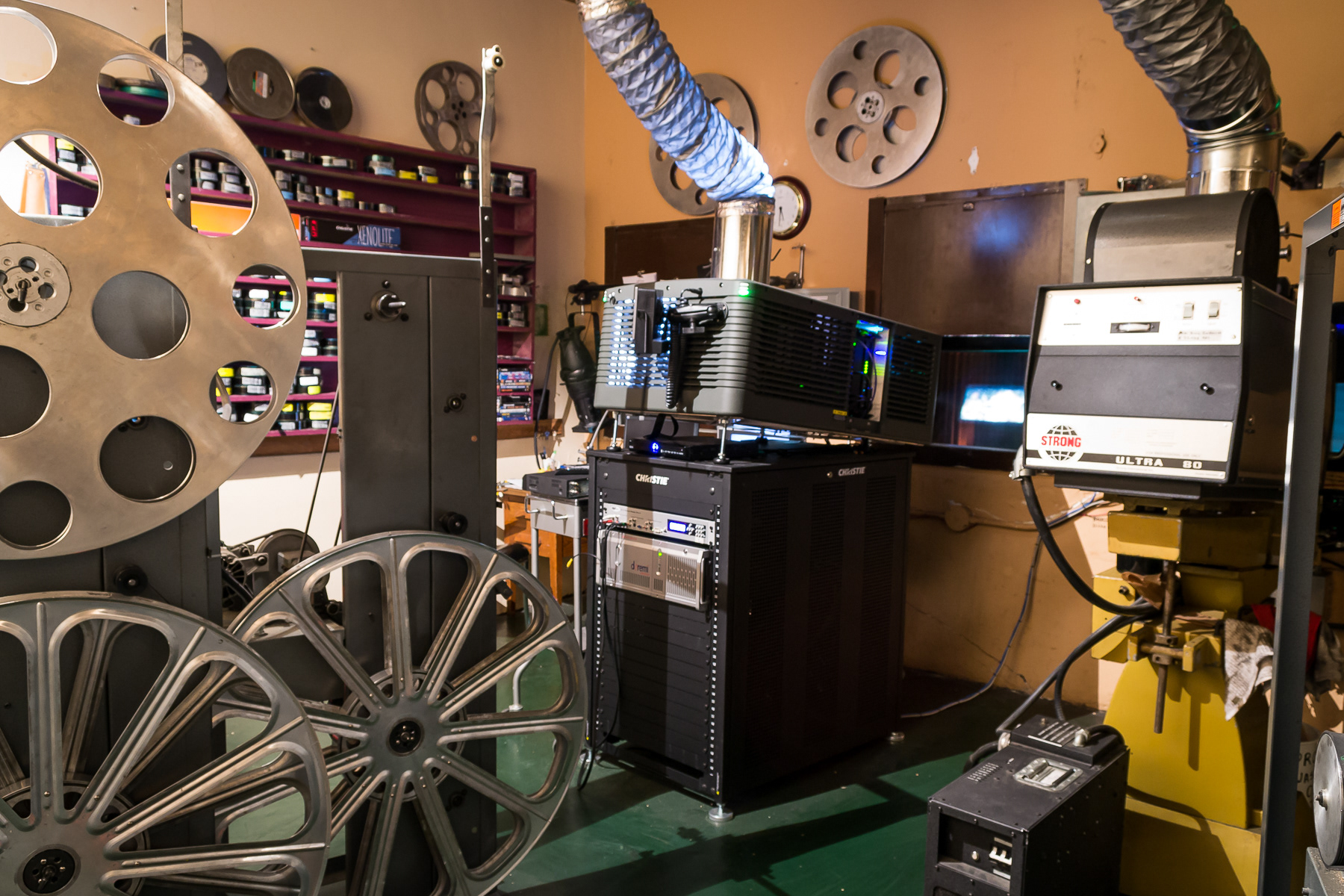 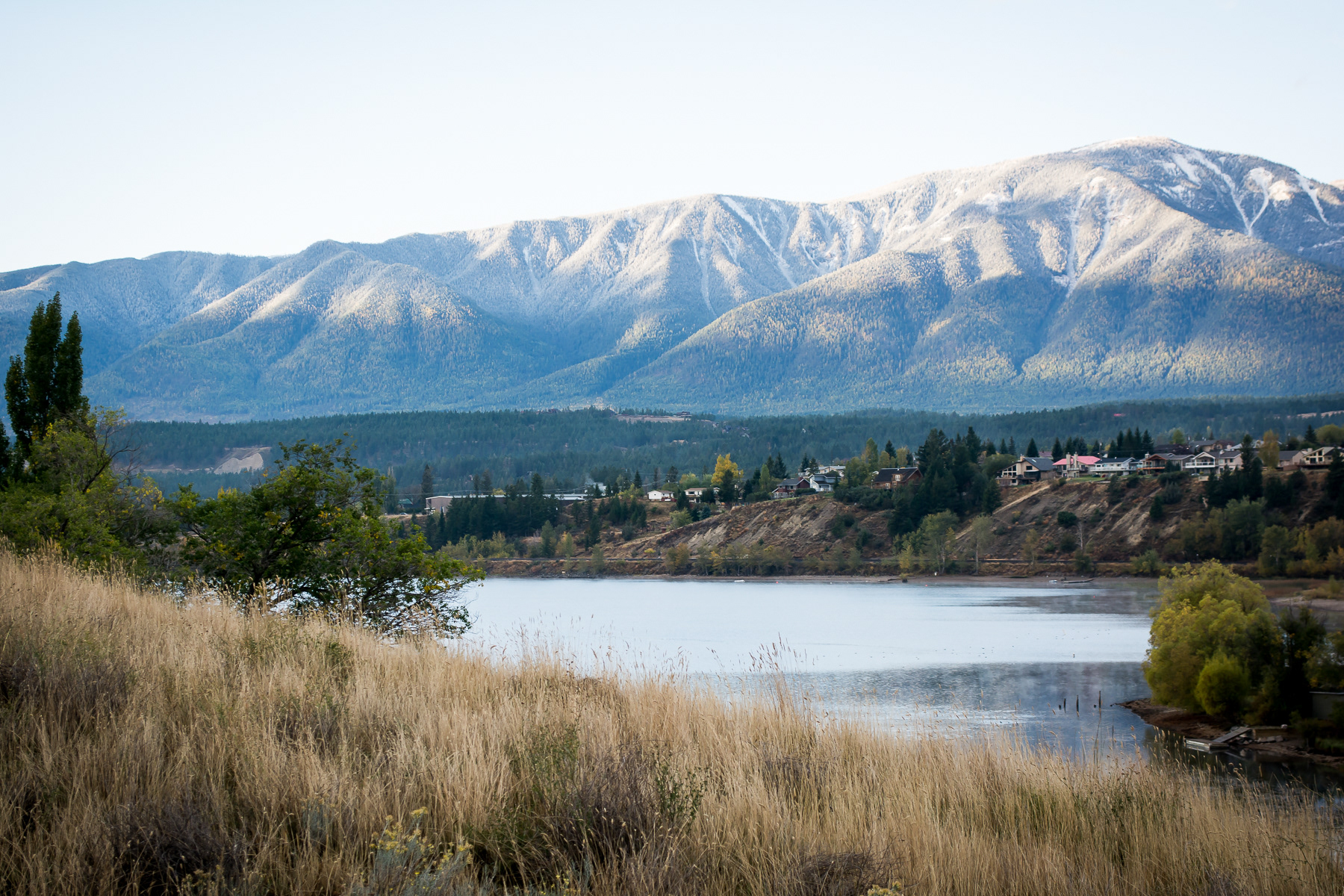 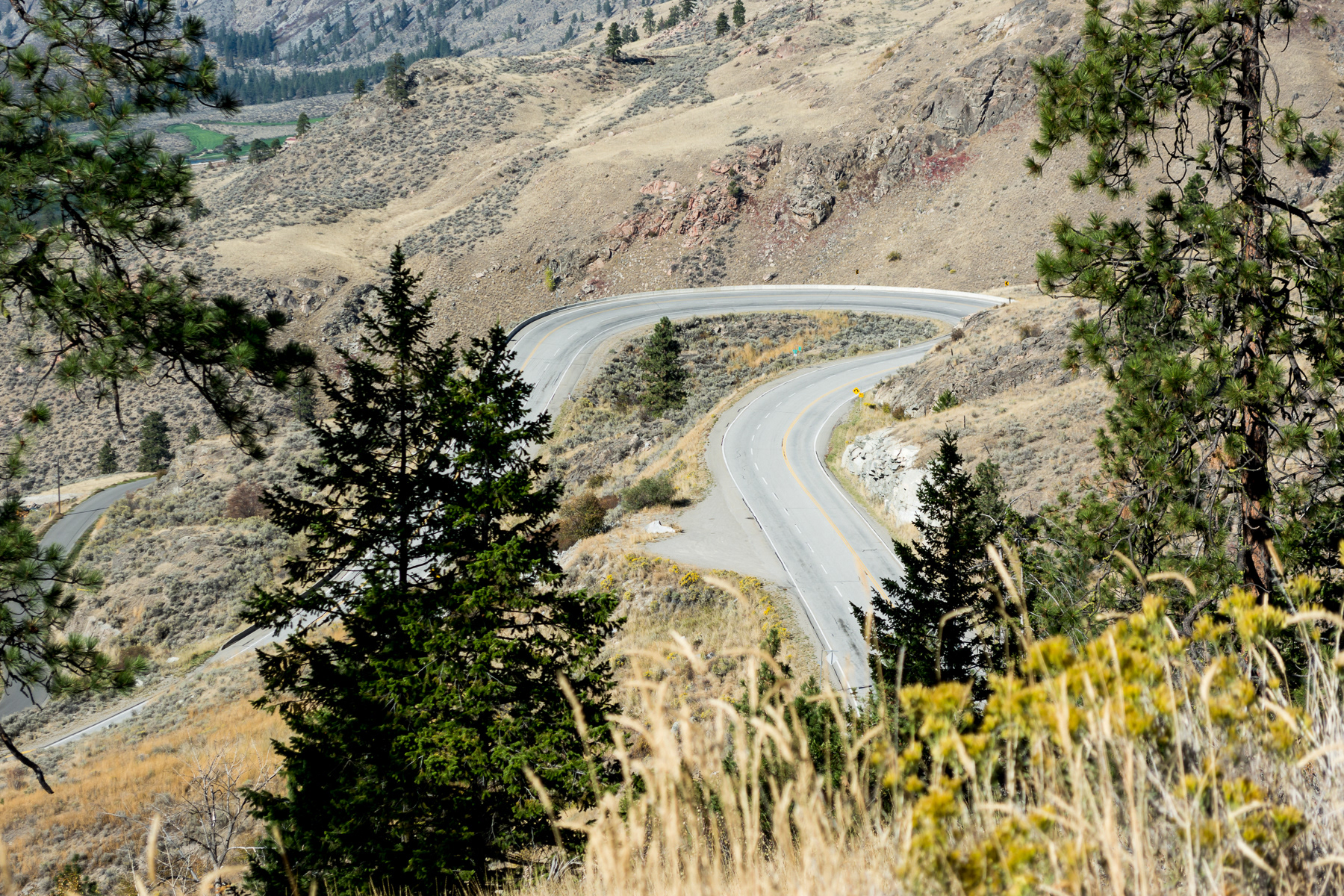 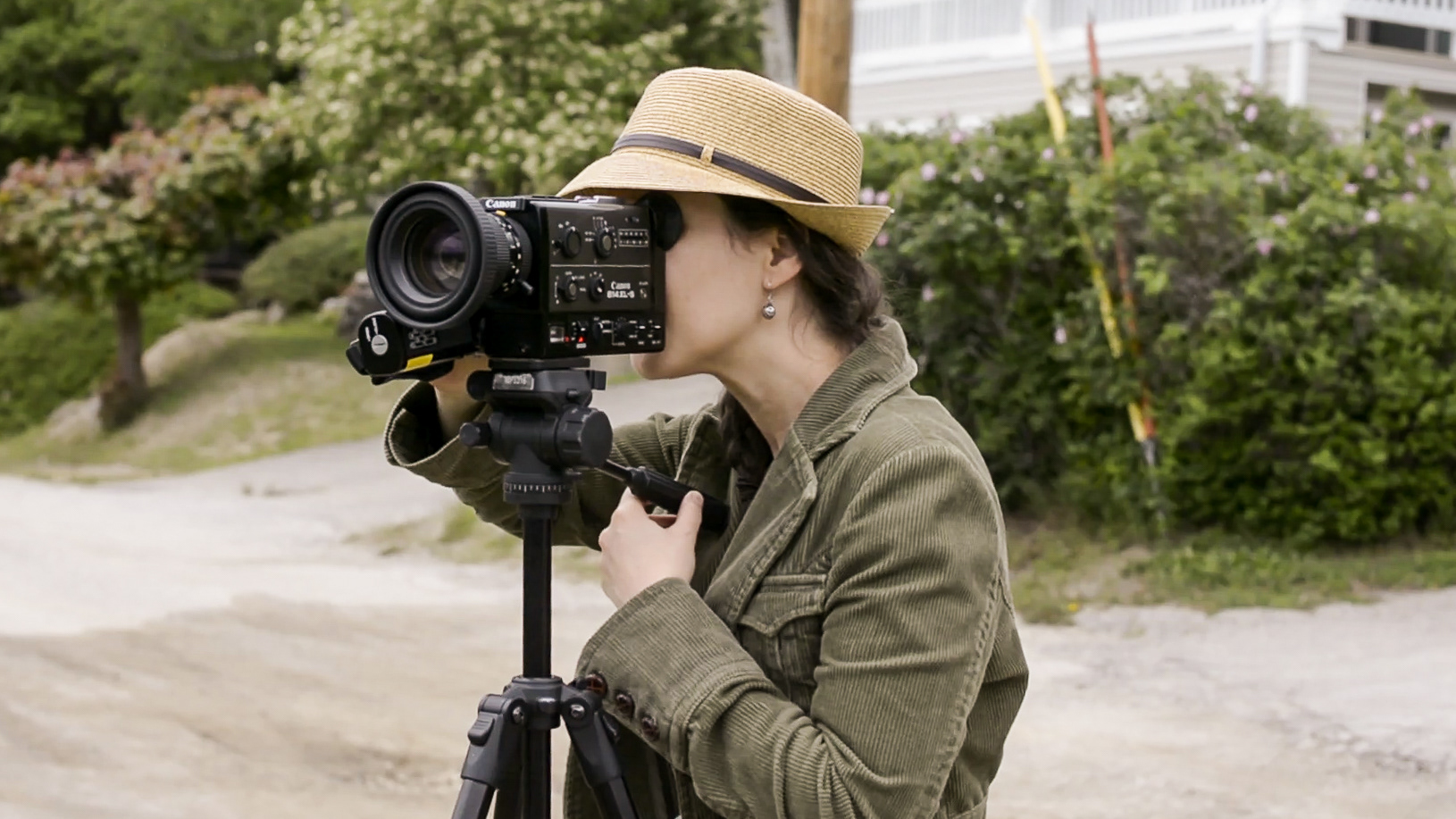 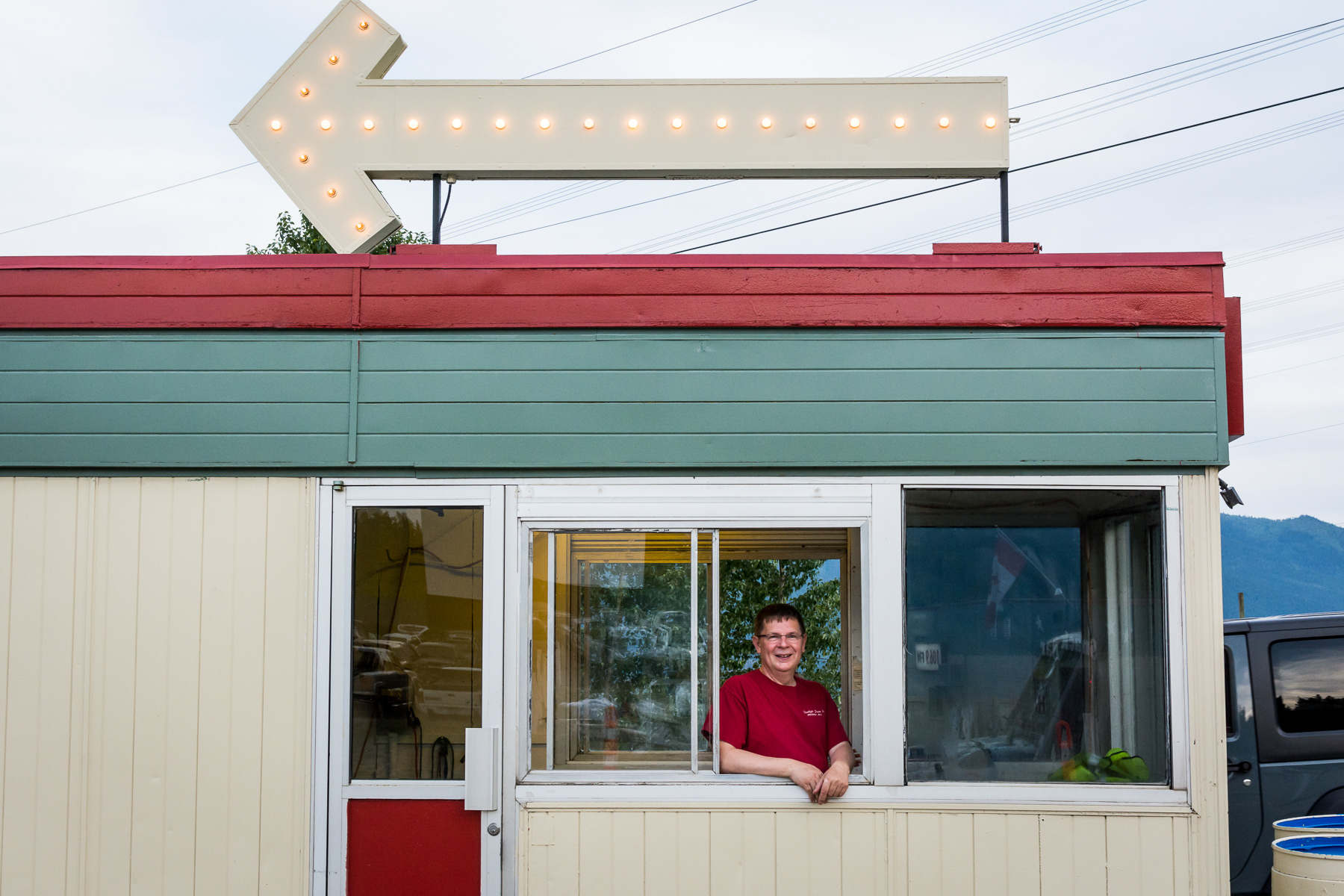 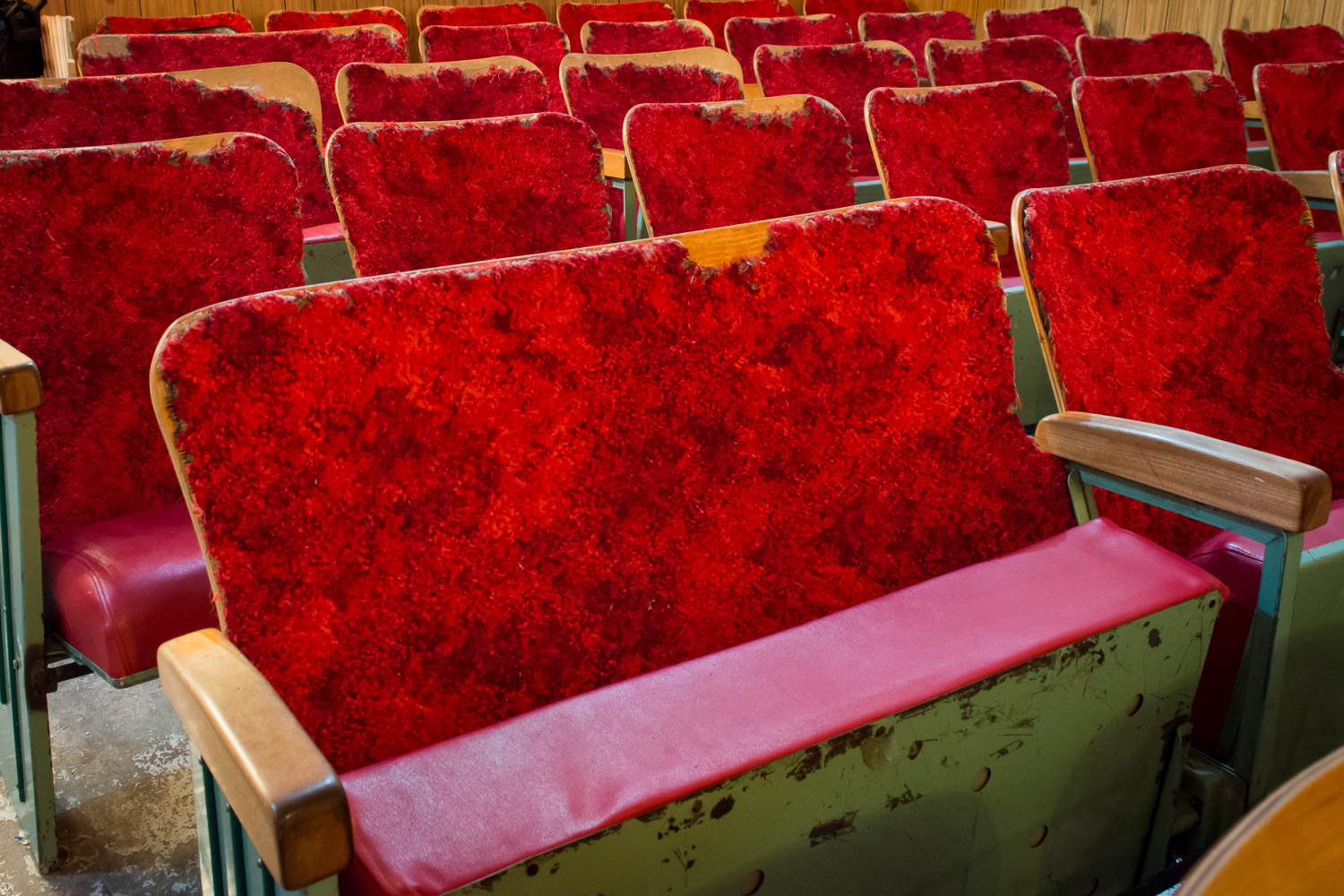 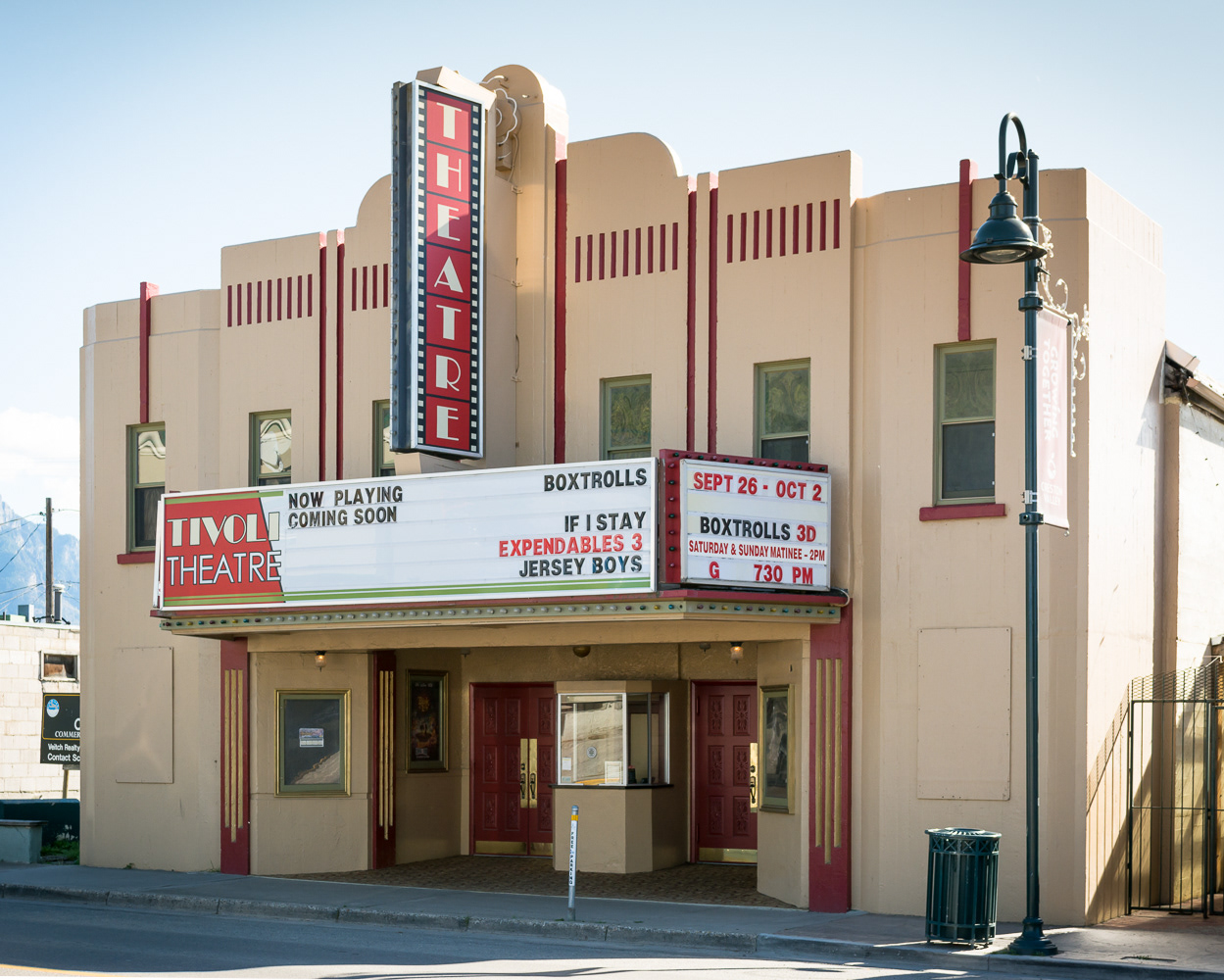 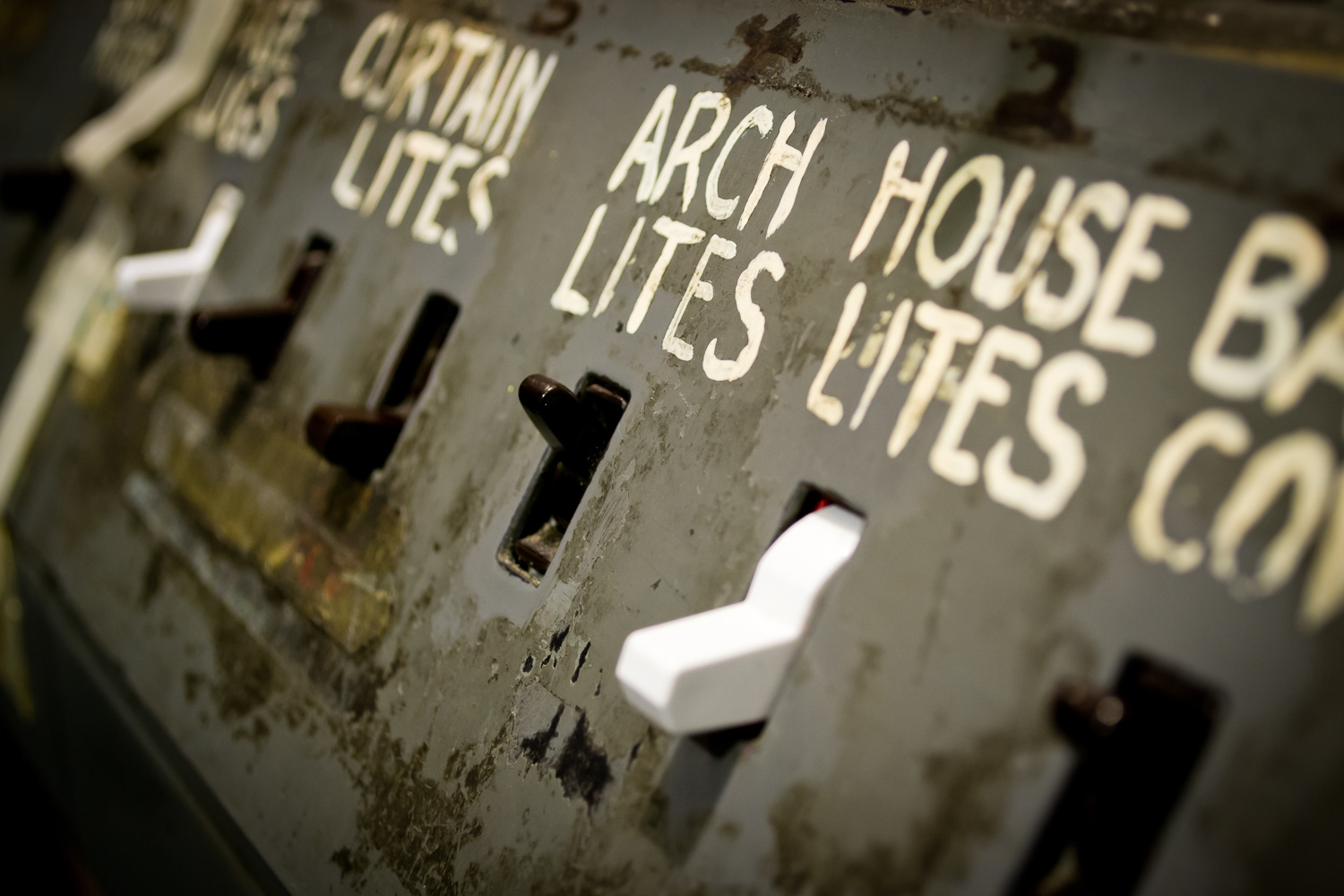 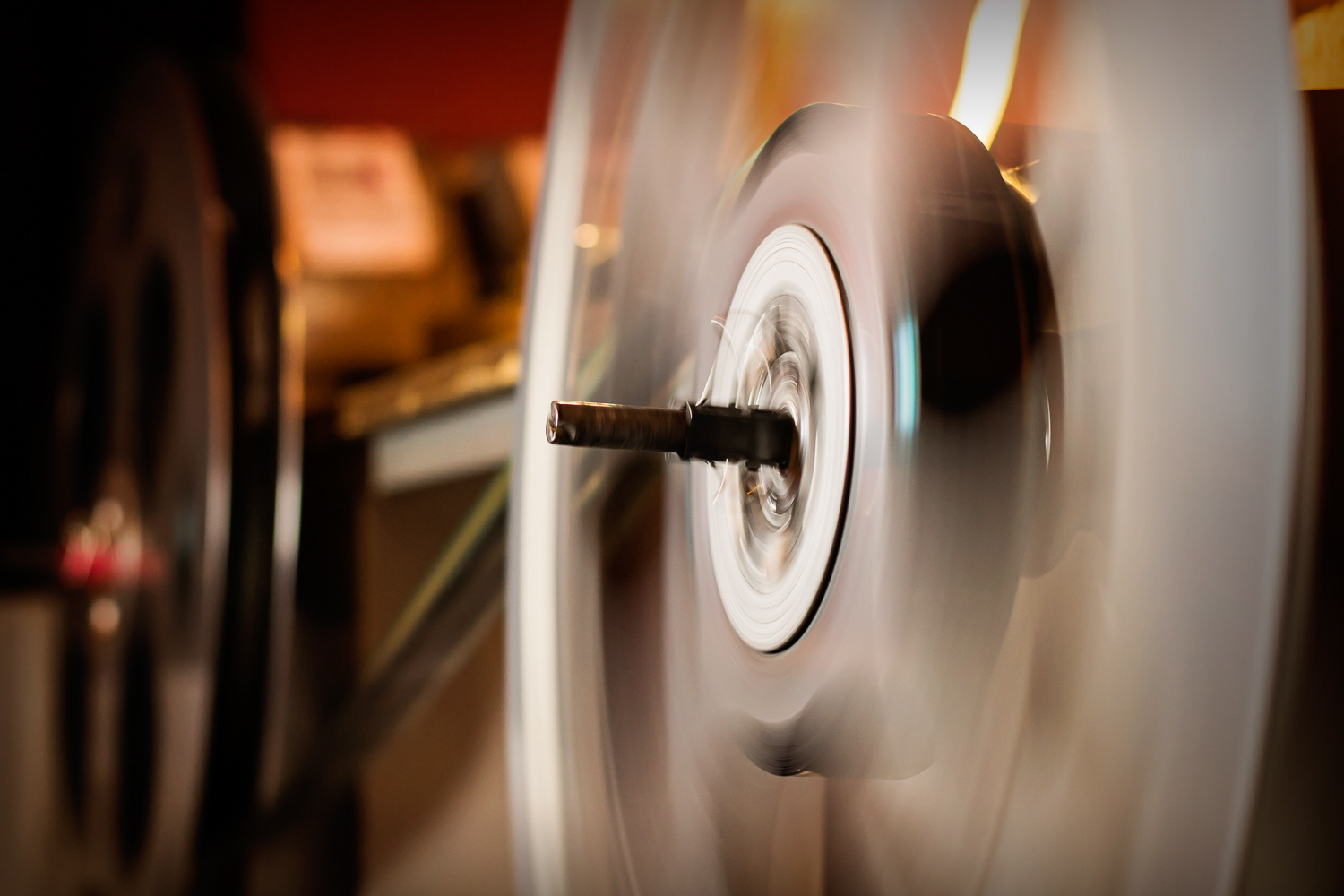 
2018 May 3
Tivoli Theatre - Creston, BC
Filmmakers in attendance

2017 October 1
The Golden Cinema - Golden, BC
Filmmakers in attendance

2017 September 25
The Royal Theatre - Trail, BC
Filmmakers in attendance

2017 September 24
The Nelson Civic Theatre - Nelson, BC
A Kinesis presentation

2017 September 21
The Roxy Theatre - Revelstoke, BC
Filmmakers in attendance

Silmara and Curtis are both partners in life and projects. They live in Vancouver with their toddler, George.
Silmara is a Graphic Designer and photographer while Curtis is a teacher and writer. In 2011 they started documenting, through photography and in text, the switch from analogue film projection to digital movie exhibition, which led to the creation of the Projection Project – a multimedia look at moviegoing in the digital age.
In early 2016, they opened the Orange Lamphouse Studio to accommodate more creative adventures, from photo-essays to short videos.
In 2014, their documentary short Till We Meet Again, a look at Kitsilano’s fabled Hollywood Theatre, premiered at the Cinematheque in Vancouver. Out of the Interior is their first feature.
...........................
THE MUSIC
Out of the Interior’s original score was mainly composed by the multi-talented Vancouver musician Dave Cunningham, who is a member both of the band Snowman in Heat as well as Jill Townsend’s Impressions Big Band.
“Curtis and Silmara gave me a pretty tall order,” David reports. “They said they were looking for a score that was epic and cinematic, but also intimate and local.” He chuckles before going on to say that the former said he wanted music that “‘had the scent of Coldstream apple orchards in mid-September’! I remember nodding, saying, ‘oh, sure...no problem.’ But of course I was also thinking, ‘how on earth am I going to do that?’”
As daunting as the challenge might have sounded at first, Cunningham achieved both the intimate-epic range, as well as the sonic crispness of autumn in the Okanagan, by producing a number of tracks in different styles – from the interwoven layers of the opening credits to the solo acoustic guitar music that accompanies some of the travelling scenes.
“The movie is essentially a road trip,” Cunningham explains. “I wanted to capture that kind of driving, forward-moving momentum combined with the quiet calm that can come when we’re on the road...I was channeling that sort of meditative calmness one gets along the Coquihalla or the winding mountain routes of the Rogers Pass…[in addition to] those beautiful forested roads, like the one that runs from Winlaw through Nakusp and Cherryville.”
The Emdes made some pretty idiosyncratic requests. “Silmara would phone me up, asking for something that sounded like ‘classic, mid-period REM...you know, when they used the mandolin all the time’,” Dave continues, “and then Curtis would email me the same day, saying ‘could you give me something along the lines of a Bach Cantata?’”
It is a testament to his skill as a composer and arranger that Cunningham was able to take such divergent requests on, and produce pieces that indeed reflected the requests while also being original and consistent with the overall vibe of the movie.
“I didn’t want anything to be too jarring or show-offy,” he says. “The movie’s story is told through the subjects using their own words and the visuals. My job, like any movie composer – whether working with documentary or narrative film – is to support and enhance those elements, not overwhelm them.”
As far as the directors are concerned, Cunningham succeeded brilliantly. “It was a pleasure to listen to what he came up with,” Curtis remarks. “It was familiar in the sense that we’d discussed it all beforehand, but it was also a surprise and delight to hear that music for the first time. Every piece snapped into the movie like a jigsaw puzzle.”
The multi-instrument works were produced in Cunningham’s home studio, while the acoustic guitar pieces were recorded live by Silmara in the Emde’s hallway.
It was in the hallway that David sang a rare vocal version of the soundtrack’s wistful, recurring signature piece Whatever Happened To (watch below).
The movie’s score was further supplemented by Trever Allen, a musician based in Oliver. He was introduced to Curtis and Silmara in the lobby of the Oliver Theatre by David and Christine Lesmeister, the cinema’s owners and operators.
At the front of the auditorium, Trevor took out his guitar and tuned up. In an exceedingly modest fashion, he told Curtis that he’d come up with a couple of original country-spiced folk tunes he hoped would be suitable for the project. With Curtis holding a small digital microphone in front of him and Christine sitting in one of the front rows, listening intently with her eyes closed, Trevor played both pieces. He played flawlessly, one take each, with the wonderful acoustics of the big room sending the music soaring.
Trevor’s dynamic pieces were originally used in a short photo-film slide show Curtis and Silmara put together about the Oliver Theatre, but they heard in them the same quietly empathetic sensibility that informs David’s solo acoustic numbers. They knew Trevor’s and David’s music – while reflecting each musician’s unique personality and approach – would nevertheless flow smoothly together from one scene to the next. They were right.
The documentary therefore features an intriguing patchwork of music as varied as the character and style of the individual cinemas profiled in Out of the Interior: Survival of the Small-town Cinema in British Columbia.
...........................
CONTACT US
Send us a message, we'll be happy to hear from you.
Thank you!
...........................